Since all of us practiced BLW in some form with our babes, we figured we’d share with you what we did and why we did it!

Baby led weaning, BLW, is a term used to described letting your baby feed themselves instead of spoon feeding them.

The first time I got to really interact with Kelsey was a night when we were both having dinner at the same on post restaurant. Both sitting outdoors, at the tables next to each other, we started to chat. Abe was around 6 1/2 months old and her little boy was around 10 1/2 months old. I remember looking over at her little boy, on his 5th jar of baby food at the time, not denying one spoonful of food as it came towards his mouth. That boy could eat. And he loved it. And here we were sitting at our table, our grilled steaks and baked potatoes in front of us, and me, cutting it all up and placing it on a little plate in front of Abe. He grabbed a piece of meat and started eating it. Then a piece of baked potato, whole, not mashed. I couldn’t help but feel weird about the whole situation. At that point I was confident in what I was doing, but I knew it looked a little off to people who’s babies were eating jar food. Luckily Kelsey and I became great friends after that, but I can just imagine what she was thinking at that very moment…

Back when I was pregnant I had this great idea to make my own baby food. I bought a book of homemade puree recipes and spent hours online doing research on those cool kitchen gadgets that steam and puree your food for you. I ended up nixing the gadget idea, but held on to the recipe book and my hand masher. When the impending solid food milestone started approaching for us I was all sorts of excited. I’ll even admit that I didn’t wait the full 6 months. I tried, but yeah, I’m weak. The concept of making my own baby food soon went out the window when I was presented with those awesome WIC checks. I can get 60 jars of baby food a month!? Why on Earth would I need to make my own. (Health benefits, better taste, I forgot all about those when the WIC check appeared in my hand!)

Anyhow, at around 5 1/2 months we started delving into jar foods. My son would take little spoonfuls, but half of it would end up on his chin and he’d continuously turn his head. It might have been due to the fact that we started early, but we’ll never know, will we? He had shown so much interest in table foods that I just assumed he was ready. First time mom here.

This is his jar food face: 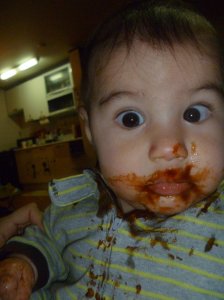 Every couple of days or so we’d try a different jar food. By the time my son was approaching his 6 month birthday I just knew this whole spoon feeding thing wasn’t gonna work for us. He hated being force fed and I hated force feeding him. I had done research on BLW, but never quite understood how it worked. Then we figured it out. It involved letting my child eat what he wanted, when he wanted, without force feeding him. I knew it was for us.

We tried avocado slices as one of his first foods. He liked them. He especially liked being able to eat with his hands! 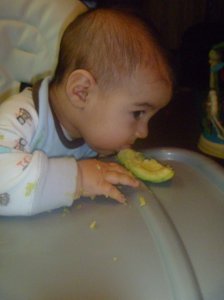 Then on his 6 month birthday we tried meat. That might not be something most parents feed their 6 month old child, but my husband and I are not most parents and we do things very very differently.

So here he is at 6 months old, gnawing and sucking on a piece of beef ribs about the size of his little hand. 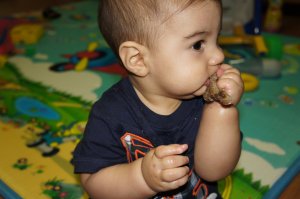 He went to town on it. He didn’t let it go for half an hour, until all the juices were sucked out and the meat was left looking pale as a ghost. He loved it. From that moment on he ate whatever we ate. From mashed potatoes, slices of sweet potatoes, rice, broccoli to mango, oh how he loves mango!

And this is his BLW face: 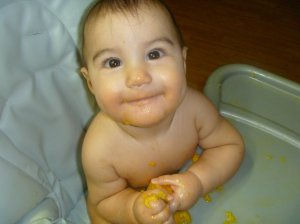 We continued trying the whole spoon feeding of jar foods approach, but he continued to turn away. We then became confident in our method of feeding him and gave up on the whole jar food approach. At 2 1/2 years old now, he tries any and everything we give him. I credit BLW for making him such a good eater and I believe that because we let him decide what he wanted to eat that it made him a less picky eater in the long run. He eats sushi, leg of lamb and all kinds of Korean food. He doesn’t stick his nose up at anything and for a mother who eats practically anything under the sun, having a son who did too was very important! 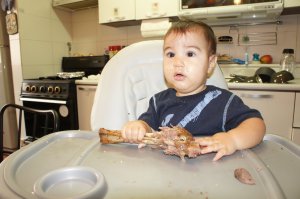 Ok, I will admit that I did think it was a little funny seeing baby Abe munch on chunks of juicy steak, but I would soon learn why his funny mommy was such a smarty pants for offering him those real foods so early.

My son was Breastfeeding but had been competing with his unborn brother for momma’s goods for 5 months already. I couldn’t be sure how much he was still actually getting during his 5 daily nursing sessions. It was a constant source of concern for me and the reason I will never get pregnant so soon after a child is born.  I was comforted by what i could see in front of me.  The Rhino’s blossoming vocabulary, strong and healthy nails, shiny hair, bright  eyes, and exuberance in everything he did showed me that he was getting what he needed. He was walking by this age and running a few weeks later. I  did know that he needed more calories and nutrients than what he was getting from me. He loved yoghurt and cottage cheese and I fed him loads of baby foods. So what Tatiana says is true, five jars of food at a sitting was definitely our thing for a while. 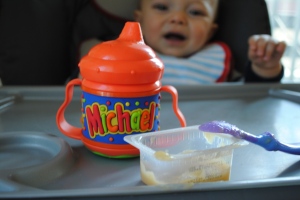 I actually loved the convenience of jarred baby food. The visual of a square meal made me happy and being able to easily feed him anywhere was nice. I liked that he could eat earlier than us since he was tucked away in dreamland by 7pm every night. It was a synch to  get him all the vegetables and fruits he needed and I knew that eventually he would become an opinionated toddler, so I took advantage of the time. They served their purpose in providing nutrients for my growing boy and that worked for us.

The downside to puréed baby food was his continued desire to only eat soft foods. When we decided that it was time to move past a puréed diet, he was not interest in chewing “real” foods.  I would give him a food which I knew he like the flavor and he would spit it out if it required more than a couple chews. This was pretty frustrating. It lasted about a year and he still has remnants of the habit but for the most part, at 2 1/2, he chews his food fine.

He prefers certain foods now but really has a broad diet and eats mostly everything we offer him. I think that a child’s diet is mostly attributed to exposure. We don’t describe many foods or associate them with any negativity. He drags a chair to the counter every time I walk in to the kitchen. Aiding in the preparation of meals definitely helps his desire to eat what we make.  We cook one dinner for all of us and we all enjoy it together, around a table. He tries everything and likes 90% of it.

His younger brother did not ever have a complete puréed diet. I wasn’t interested in having a lazy chewer again and I was already preparing proper meals for the rest of the family. He also had all the breast milk he wanted so he didn’t need the extra foods. Different times call for different measures.  He did eat applesauce and the occasional jar of green beans. We all loved the pouches of squeezable foods. The convenience  is awesome but they are just so pricey. After seeing baby Abe’s ability to eat any food at such a young age, I felt comfortable letting The Bone eat real table foods without worrying about choking. The Bone never had a problem chewing food.

After seeing Abe eating solid foods like such a champ, I did a lot of research into BLW for my own daughter. We offered her rice cereal at 5 months, which she hated. Can you blame her? So that was a one time thing. We also attempted a few jars of food that we had gotten free from Tati, and once again, my little bean would eat one of two spoonfuls and turn away, uninterested. I was a little confused because she had shown such an interest in OUR food, so I decided to jump right in to BLW (To the slight alarm of my inlaws whom we were staying with at the time 🙂 ) we started with cucumber, which went really well! We upgraded to avocado and banana, and in a week she was eating cake. Lol! We DID enjoy what lovingly came to be known as “the banana hammock” in those beginning stages. Before she was 7 months old, without a tooth in her head, she was chowing down on pasta, chicken, pork chops, and whatever else we were eating. 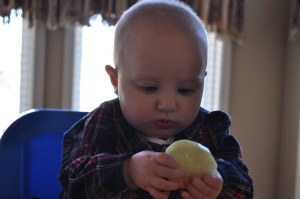 My daughter is 18 months old. She has never had a problem chewing food, or an aversion to texture. She didn’t end up getting her first tooth til she was 13 months, and she still had no problems munching on tough meats and veggies, etc. She IS going through a bit of a picky toddler phase, and definitely has her favorites, but I wouldn’t change anything about our BLW journey 🙂 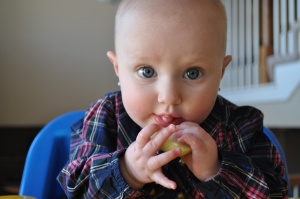 who wants life to be tidy when you can have more fun making a mess??!

fashion, food and flirts
I Should Have Called In Sick